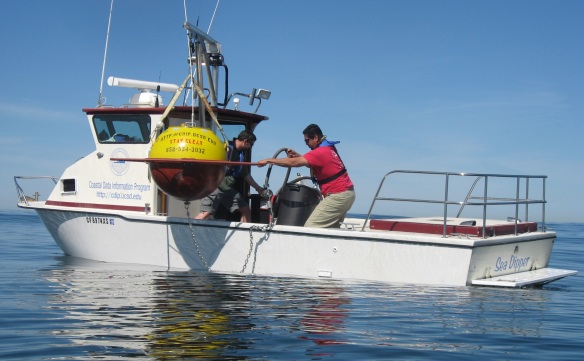 If you’re a surfer, one of the things that matters most is the current state of ocean waves crashing off your shores. If you’re not a surfer, the waves still matter – you probably just don’t realize how much they can affect your life.

People who pay attention to waves want to know a lot about them: where they’re coming from, how high they are, whether a watery behemoth is barreling toward the nearest coastal harbor. And reliable real-time information on how those waves are behaving – and what they’ll do next – is crucial to anyone planning to go out on the water. This need for wave data helped spawn the Coastal Data Information Program (CDIP), funded collaboratively by the U.S. Army Corps of Engineers and the state of California, and based at Scripps Institution of Oceanography. Since 1975, CDIP has deployed and maintained a series of ocean wave buoys along both U.S. coasts, the Caribbean, and Hawaii and Alaska, resulting in a 40-year high-resolution collection of wave data that has helped everyone from coastal engineers and researchers to surfers, sailors and recreational beach visitors. 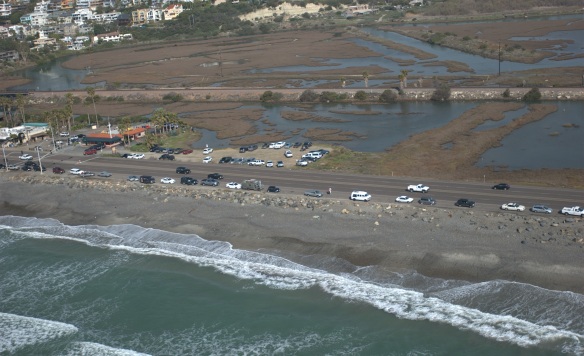 Coastal collaborations – Wave information, both real-time and historical, helps engineers assess best options for coastal infrastructure, such as roads and popular beachfront properties. Above, the historic Highway 101 passes through a low point between the Pacific Ocean and San Elijo Lagoon at Cardiff, CA. Coastal roads such as these are vulnerable to storm surge and high wave events (photo courtesy of CDIP).

Coastal engineers and planners rely on information from wave histories and past wave events to properly develop and manage coastal infrastructure and harbors. Because waves carry so much force and energy, they can have serious effects if they hit a coastal development that isn’t structurally prepared to handle them. The 2012 Hurricane Sandy event was an extreme example, producing waves up to 45 feet high at some offshore locations, but predicted increases in sea level and changes in weather patterns indicate that storm surges and higher-wave events may happen more frequently in the future.

Waves also play a major role in redistributing sand and reforming beaches, which can be compounded by human-made coastal infrastructure. Researchers use real-time CDIP data to calibrate research models and experimental details in studies of the physics of wave generation and propagation, effects on sand transport and shoreline reconfiguration, and mixing of offshore pollutants – and of course, all of this information eventually ties back into coastal planning and development. My California Sea Grant Fellowship will also be incorporating CDIP wave data into time-averaged oceanographic products to help track West Coast-wide marine debris movements and ocean acidification events.

Shipping up data – Container ships (such as this one entering the Port of Long Beach) rely on accurate nearshore wave data to indicate whether they will have enough draft clearance to safely enter port. Even a slight increase in wave height and period can increase ship under-keel clearance requirements (photo courtesy of Jacobson Pilot Service).

In addition to helping coastal builders and researchers, CDIP data supplies key real-time information to ocean users. Harbormasters and cargo ship captains rely on accurate real-time wave periods to determine whether ships can safely enter port. Large container ships can sometimes require under-keel clearance (the water depth required for vessels to move over the bottom) of 65 feet in order to enter narrow, shallow port channels. Larger, longer waves cause ships to pitch and roll, increasing their under-keel clearance requirements dramatically, so a ship that could have safely entered a port under low-wave conditions may have to wait offshore for several days if wave height and period increase. Wave forecast models can help predict when these events will occur, allowing ships to better plan port approaches and entrance times, to avoid costly offshore waits. 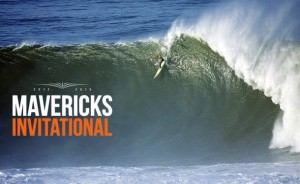 High rollers – The annual Mavericks surf competition at Half Moon Bay, CA, is scheduled each year to coincide with a large winter swell. The 50+ foot waves that fuel the competition’s extreme nature are predicted and monitored using CDIP wave data (photo courtesy of Surf Bang).

And of course, CDIP wave data helps cue surfers into when and where to find the best local breaks. In fact, the timing of the infamous annual Maverick’s surf contest off Half Moon Bay, CA – which requires a large winter storm to produce the 50-foot rollers that lead to such extreme rides – relies on wave knowledge from CDIP buoys. SCUBA divers, small-boat sailors and even everyday beach-goers also scope out wave data, to know what to expect when they hit the water.

Making a splash – CDIP wave buoys provide a comprehensive network of nearshore wave data along both US coasts, Hawaii, Alaska and the Caribbean (photo courtesy of CDIP).

The CDIP wave buoy network requires active hands-on care and maintenance, and working with the CDIP buoys can be a bit like being a firefighter. Things will be calm and routine around the shop for days, until a buoy suddenly sends off a distress signal – or worse, stops sending information at all – and the team must quickly collect the buoy and bring it back to the shop for repair. But the unassuming yellow spheres floating off harbors and beachfronts provide an invaluable eye into how energy moves and changes at the land-sea interface, and the impacts that those changes may have on our coastal communities.