After a successful WCGA Fellows meeting, Todd, Alison, Suzanna, and I sat together for lunch at Agua Verde on the edge of Lake Union in Seattle to enjoy the Pacific Northwest summer’s delayed arrival.  We were discussing potential blog posts, when slowly an enormous research vessel emerged from under the University Bridge. Its bow towered above us in full view, and we realized it was the University of Washington’s 274-foot research vessel, the Thomas G. Thompson, returning to port. The mammoth ship dwarfed the numerous kayaks casually paddling by as we contemplated where the vessel was coming from and what it was doing.

The next day I did a little research, and discovered the Thomas G. Thompson had just returned from a very important and successful cruise on the North Pacific dubbed Visions ‘11.

The main purpose of this expedition was to aid the installation of an underwater network of sensors that remotely monitors ocean activity 300 miles off the coast of Washington and Oregon. Funded in part by the National Science Foundation, this expedition was a part of a national project called the Ocean Observatories Initiative (OOI); a collaboration of distinguished marine research institutes to move away from expensive and resource intensive ship-based research towards remote research that can provide real time data for many years.

Utilizing high-power and high-bandwidth fiber optic cables, these underwater observatories, will monitor the chemical, physical, biological, and geological processes between the ocean floor and surface. These remote “nodes” will allow scientists from around the world to conduct real time experiments to help understand deep-sea ocean dynamics. The mission, according to the OOI Science Plan Summary, is to provide practical information for a variety of uses including “fisheries management, maritime shipping and safety, public health, homeland security, tsunami warning, and weather and climate forecasting,” with emphasis on cutting-edge technology to help understand earth-ocean-atmosphere systems. 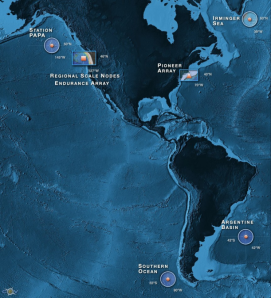 The research vessel embarked with a crew of scientists, researchers and students interested in exploring underwater volcanoes, vents, and methane hydrate – methane gas locked in ice. Methane hydrate is getting increased attention in the energy sector as a potential fuel source to supply energy for hundreds to thousands of years.  Achievements from the cruise included video of a recent lava flow and a cable inspection captured by an underwater remotely operated vehicle (ROV) called ROPOS.  One of the more captivating and bizarre videos the ROV took was of a foam human head and coffee cup slowly being compressed as they descended to illustrate the immense pressure at abysmal depths. 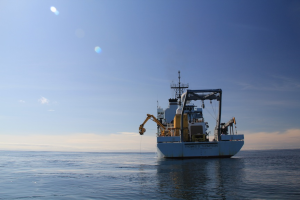 The observatory is scheduled to be active by 2014, at which point scientists and students alike can have access to real-time streaming data via the Internet.

The WCGA, and budding marine scientists coast wide, will be paying attention to the West Coast OOI as it unfolds, not only as a partner with the Integrated Ocean Observing System (IOOS), a federal, regional, and private-sector partnership working to enhance our ability to collect, deliver, and use ocean information, but for observational data that will inform climate change, ocean acidification, and integrated ecosystem assessments. According to the 2003 National Research Council Report a key finding states “The OOI will greatly improve the ability of operational ocean observing systems such as the Integrated and Sustained Ocean Observing System IOOS and the Global Ocean Observing System (GOOS) to observe and, predict ocean phenomena.” Furthermore, as a significant source for scientific data, it will be important to pay attention to how it connects to our West Coast regional data network that the WCGA is helping develop. The West Coast regional data network would provide access, data standards, prioritize data gaps, and data display formats to existing and future data sources at the local and state scale they are compatible at the regional scale.

Finally, I will leave you all with a poem written on the previous Visions ’05 cruise, to remind us that the scientific accomplishments of these cruises are just one aspect of the many human achievements derived from many long weeks at sea.

I’m out on the ocean with nothing to do,
But build up my sensors and make them read true.
For this kind of work, I’ve got tools of all kind,
Some nice and normal, some boggle the mind.

I’ve got wrenches and drivers, both Phillips and flat,
Suppliers of power and cables that chat.
There’s tin snips and test clips and drill bits galore,
Connectors, dissectors and meters and more.

I’ve got kite twine and solder and cutters of tube,
And this guck for my o-rings, it’s some kind of lube ,
There’s lithium batteries and green circuit boards,
A funnel in case something needs to be poured.

I’ve got wire and bands, both made of titanium,
Excedrin for the occasional pain in my cranium.
There’s ICL cones and orange spiral wrap,
And computers so small, they fit on your lap.

I’ve got bungee for tying stuff down to the bench,
All manner of screws and a spiffy torque wrench.
There’s plastic zip ties for keeping things neat,
And Fiberglass sleeving, at least 90 feet.

I’ve got cylindrical cases with titanium caps,
And molecular sieves for water mishaps.
There’s sensors for chloride, $3,000 a shot,
Sometimes they work…sometimes not.

I guess you could say that’s a mighty big list,
Yet I can’t help but feel there’s something I’ve missed.
Ah, silly me, That’s it! But of course! ,
More useful than code by a fella named Morse! ,

It’s gray and it’s sticky and one side is shiny,
More than a few times, it’s rescued my hiney.
The sound when it’s peeled makes you jump off your seat,
And the scent that arises, oh what a treat! ,

It works magic and wonders in all kinds of places,
From deep ocean vents to those talkative faces,
Man’s best idea since he came from the ape,
Where would I be without my roll of duct tape.

More poems from this cruise and others can be found here along with a daily log found here.